Our apologies that the main Focus website has not been updated regularly, but we have been working in the background to prepare a new section of the site that will deal with the regular postings, covering news items and other topical matters that need to be brought to your attention on a daily basis.
Our new Focus Blogger site www.focustransport2011.blogspot.com will be brought to you by the regular team of contributors and the Focus Flickr site www.flickr.com/photos/focus_on_flickr gives regular updates of photo collections relating to the current transport scene and also shows archive material from slides and prints that are relevant to various subjects under review.
Please bookmark these sites and visit them on a regular basis.
This main Focus Transport site www.focustransport.org.uk will remain in use to cover more in depth articles, reviews and interviews so continue to keep and eye on happenings here as well.
In the meantime we hope you enjoy visiting our three websites and if you have any contributions or comments we would be pleased to hear from you.
Posted by Richard Lomas at 09:34 3 comments: 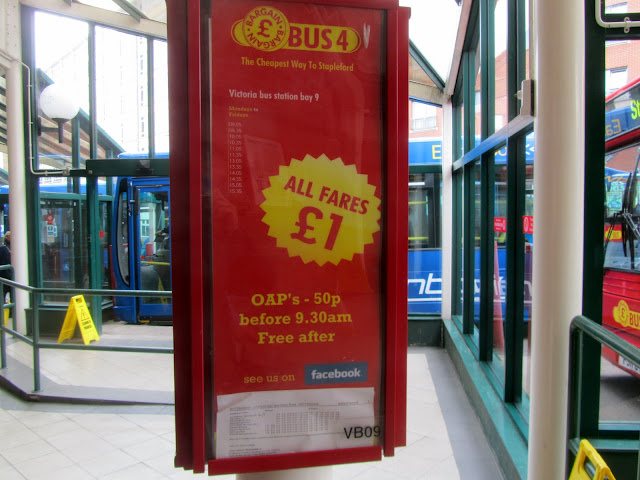 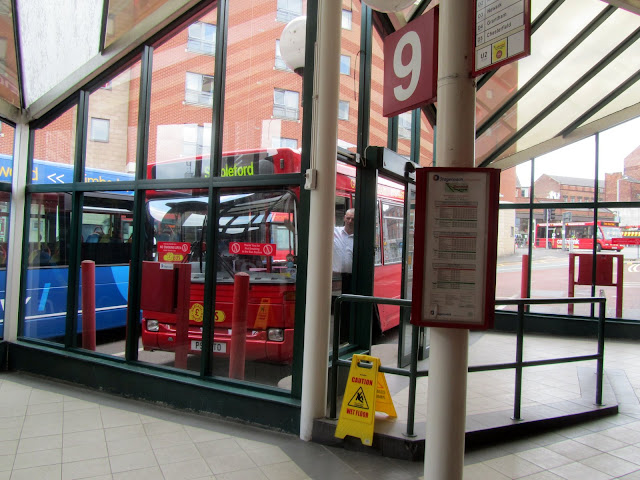 Way back in 1972 I worked for the Trent Motor Traction Company when it was announced that fellow NBC subsidiary the North Western Road Car Company of 2 Charles Street, Stockport was being broken up and that Trent were inheriting Matlock and Buxton depots. Somehow these two depots never really fitted into the Trent network which was centred on Nottingham and Derby. Matlock was a small town/rural operation and Buxton looked towards Manchester. Over the years all the rural services were withdrawn or replaced by tendered service run by other operators leaving Matlock with the 6.1 service from Bakewell to Derby via Matlock and Wirksworth and Buxton with a cross town local service, the 199 to Stockport and Manchester Airport and a share of the Transpeak Manchester, Buxton, Matlock, Derby, Nottingham service.
Yesterday it was announced that Centrebus subsidiary Bowers of Chapel-en-le-Frith who operate most of the tendered services in and around Buxton and trent barton have formed an exciting new bus company called High Peak. This will have the effect of partially recreating the old North Western company’s Buxton operations with services to Ashbourne, Macclesfield and Glossop.
However these kinds of changes are never straightforward as tb’s Derby depot operates some Transpeak journeys. TM Travel also have a number of tendered services running into Buxton and both TM Travel and trent barton are owned by the holding company Wellglade.
Which will be the dominant partner in High Peak? My guess is that it will be Centrebus as the new company is called ‘High Peak’ and not ‘high peak’.
Posted by Richard Lomas at 08:24 No comments:

http://www.buxtonadvertiser.co.uk/news/business/new_high_peak_bus_company_following_merger_1_3392526
Posted by Richard Lomas at 18:42 No comments: 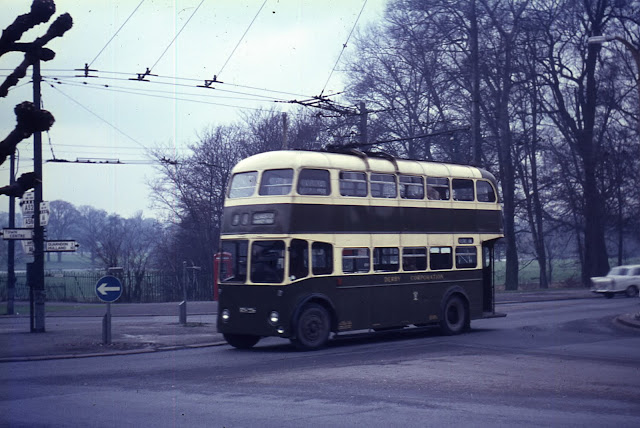 Posted by Richard Lomas at 07:14 No comments:

Leo's Bus & Coach Tours has now ceased all enthusiast based operations due to problems on recent trips.

However 'J.B. Tours' have agreed to provide the trips which we had planned over the next few months.

For those of you who are interested in future enthusiast based trips which they are running please visit: http://jb-tours.blogspot.com/
Posted by Richard Lomas at 07:44 No comments:

The Competition Commission has issued its provional report which is riddled meaningless with acroynms like AEC. However Nottingham was used as a case study which may be of interest.
http://www.competition-commission.org.uk/inquiries/ref2010/localbus/pdf/app_nottingham_study.pdf

Tomorrow (Saturday) new Optare Versas are launched on the Spondon Flyer. This info from Trent Barton Live on facebook
'Come fly with us tomorrow at Derby Market Place! See our new spondon flyer buses from 10am, and then in the Bus Station from 12.45 and maiden flights after 1pm. Freebies galore with Mr MANGO and the team :)'
I think the first enters service at 13:00 (sorry 1:00 pm). I hope to publish some pictures tomorrow.

A couple of weeks ago trent barton rerouted the Allestree service through the city centre. It now travels in a loop and doesn't call at the congested bus station. However not everyone agrees with this decision.
Protest in Allestree?
Call for watchdog.

Posted by Richard Lomas at 20:04 No comments: 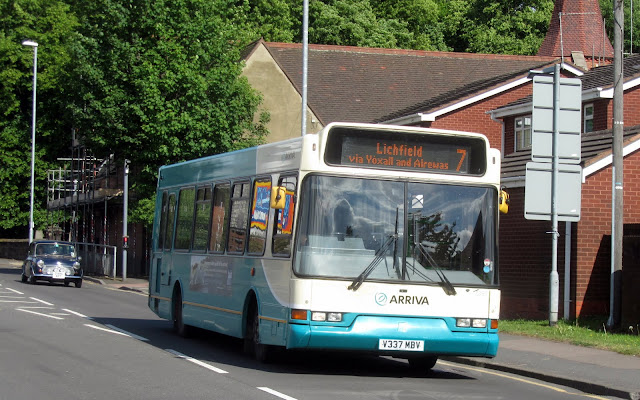 Posted by Richard Lomas at 09:16 No comments:

Gills operate a half-hourly commercial service between Long Eaton and Sandiacre. The bus is a former NCT Optare MetroRider. The challenge now is to get a picture of this bus alongside the new Optare Versas on the common section of route with 'my 15'.
(Thanks for the correction Peter. I have made the necessary change.) 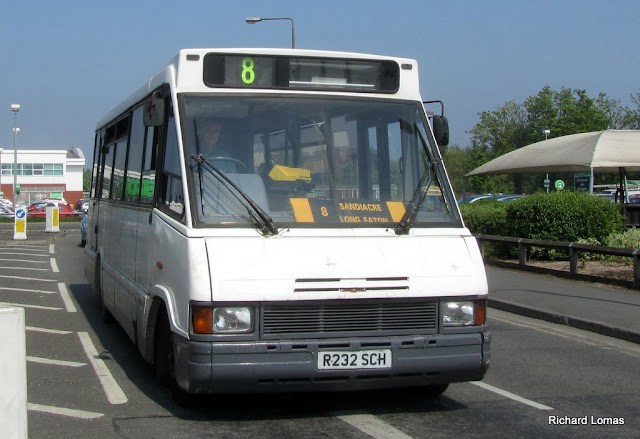 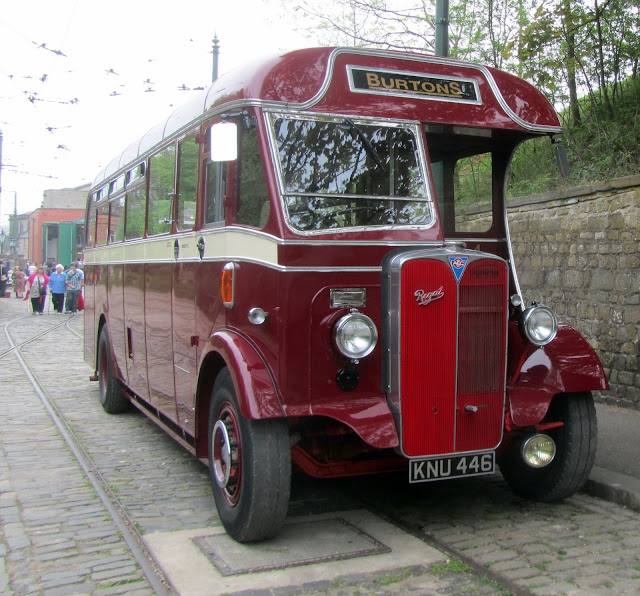 Posted by Richard Lomas at 13:48 No comments:

My old friend Jim Jordan has sent me this picture of Silver Service number 4. Jim writes:

"A Silver Service Regal on the last day of trains through Rowsley until the restorers moved in. Is this No4? Bill Gardener bought their Q but I am not sure about the Regal." 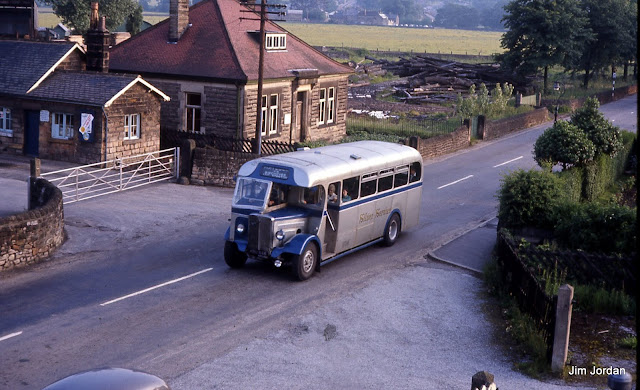 Posted by Richard Lomas at 07:00 No comments:

A few old pictures inclding this one have been published by Focus Transport.
Following on from my Soviet Union theme can anyone remember what is happening here or perhaps suggest a humerous caption? Here is a clue it was taken in Matlock before the days of 'health & safety'. 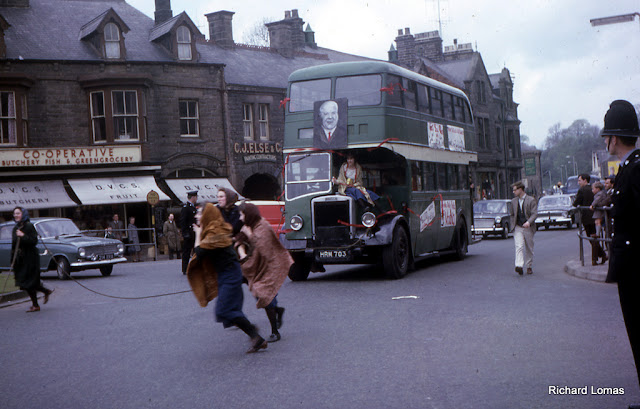 Posted by Richard Lomas at 16:14 No comments:

On Monday 9th May trent barton's Swift between Derby and Uttoxeter is to be extended to Tesco in Uttoxeter and the Optare Excels to be replaced by refurbished Wright Eclipse bodied Volvos. (Perhaps the record temperatures in April have enabled the Swifts to fly early this year.)

The next upgrade will be to the Spondon Flyer the following Saturday, 14th May.
Posted by Richard Lomas at 07:40 No comments:

There is only one long distance train from Tallinn, the overnight sleeper to Moscow, so the coach station is quite busy. 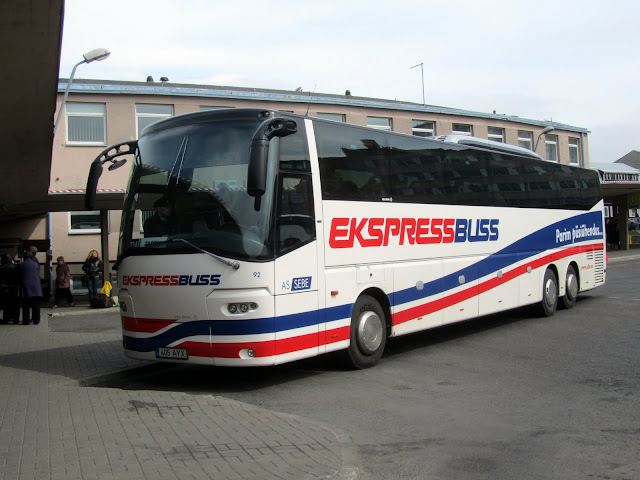 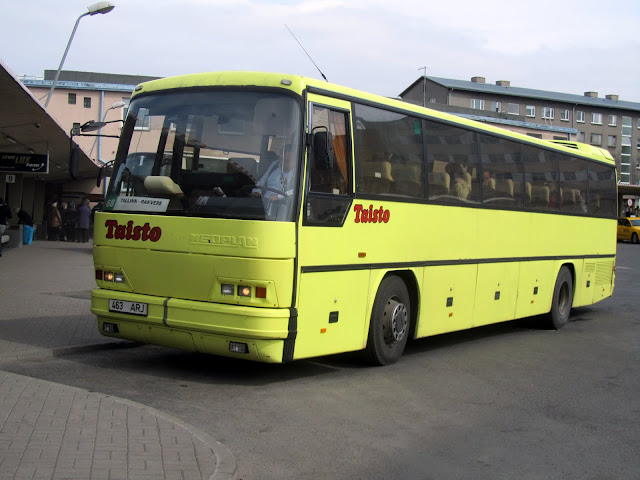 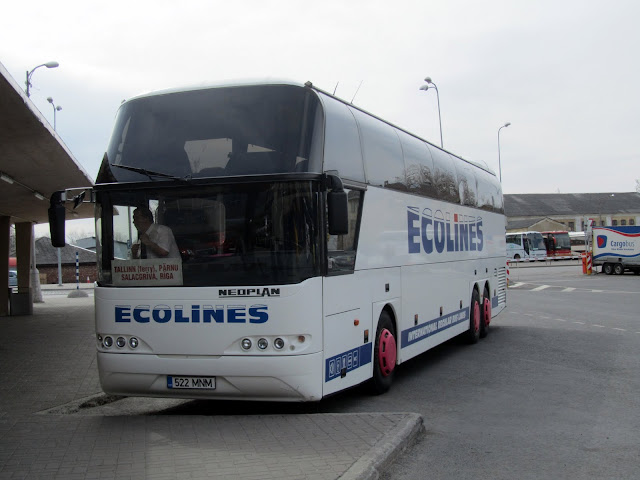 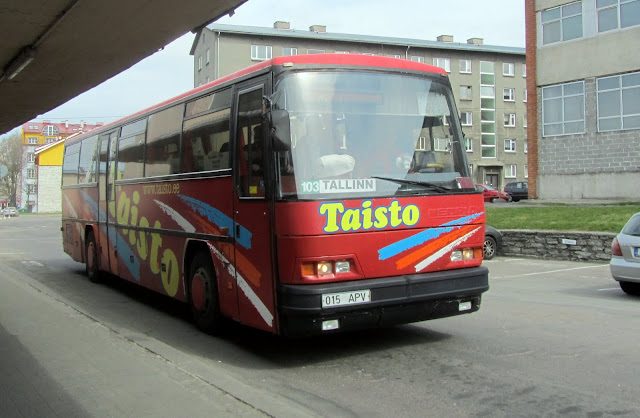 Posted by Richard Lomas at 07:36 No comments:

In the Soviet Union local city transport was usually provided by trams and trolleybuses owned by the local authority. Buses were used for services to outer suburbs and the surrounding countryside and were separately owned and managed. I didn't see any former Soviet buses. 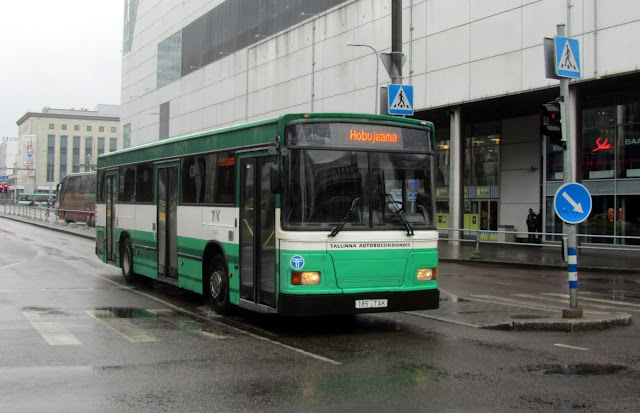 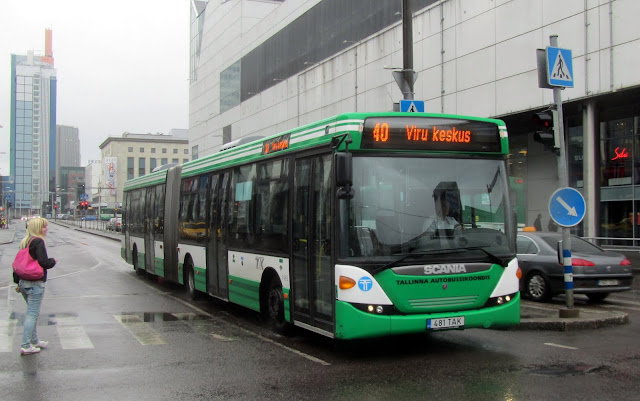 Posted by Richard Lomas at 07:16 No comments: 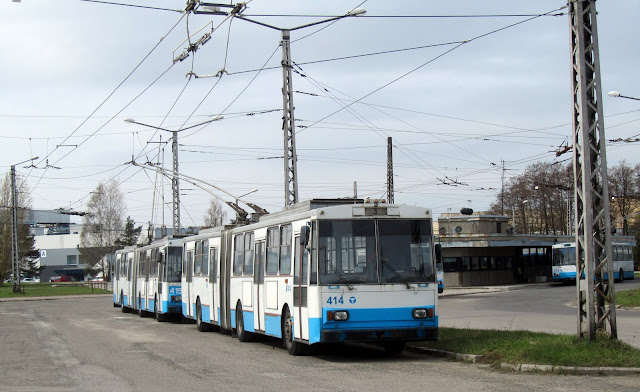 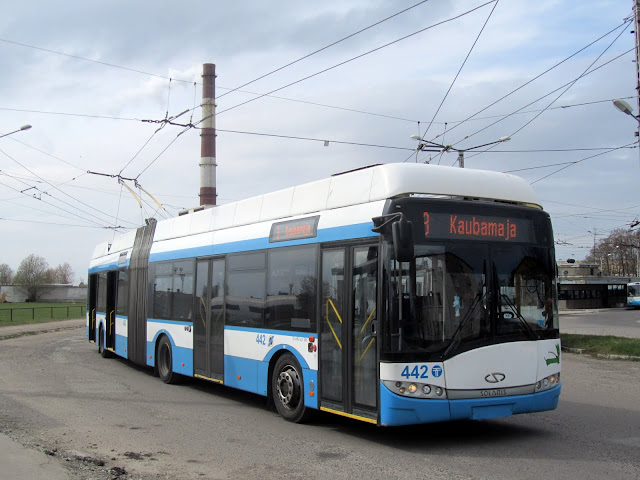 Posted by Richard Lomas at 05:19 No comments: 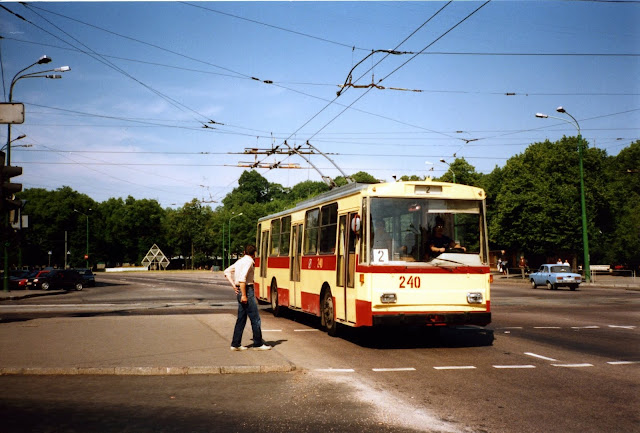 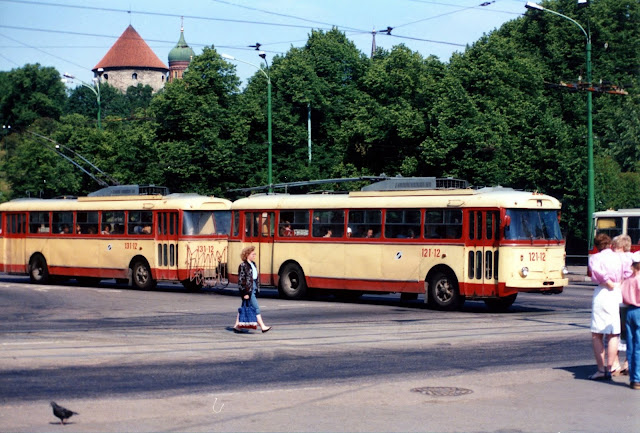 Posted by Richard Lomas at 06:20 No comments:

I think Saturday was the last day of operation for Bargain Bus 4 from Nottingham Broadmarsh to Long Eaton via Stapleford. From Tuesday it will operate from Victoria bus station to Stapleford. I also understand that the 20 minute frequency on Bargain Bus 2 from Broadmarsh to Cotgrave will be reduced perhaps to hourly. 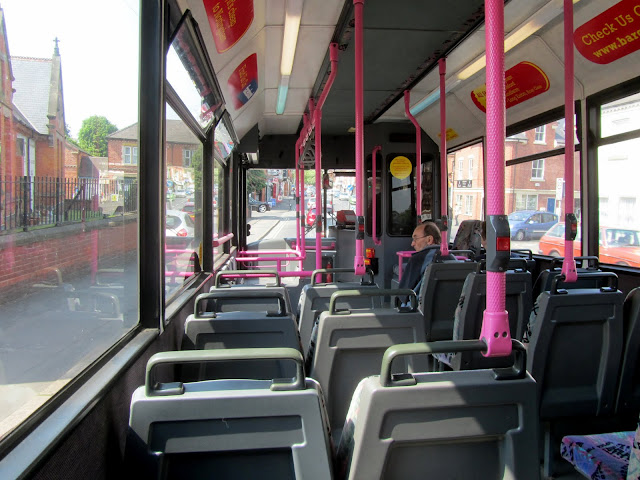 Posted by Richard Lomas at 07:20 No comments:

Posted by Richard Lomas at 08:00 No comments:

Richard Lomas
Richard's Tram Blog is a personal blog aimed at publishing pictures of trams and their infrastructure.
The Historical Archive is being replaced by a series of 'Pages' on this blog.
Travels with a Bus Pass contains photographs of buses.
The other blogs are holiday reminiscences.